My three minutes in Poland – dedicated to victims and survivors 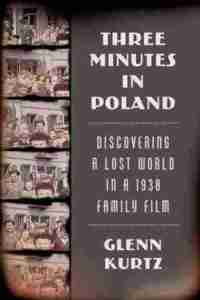 I will start my review with a disclaimer. Below are my musings on this amazing book, not what I would call a review in any strict sense.

Why this book?
I first came across this story a few months ago. One of the Jewish groups I am a member of on Facebook, posted a link to a video that was described as showing a few moments in a Polish shtetl on the eve of World War II. I clicked on the link, watched the video and promptly almost burst out in tears at my desk. I’ve watched my share of documentaries on the atrocities of the Nazi genocide and both “Schindler’s List” and “The Pianist” made me cry so hard that I had given myself migraines. So I thought myself if not immune, then at least somewhat stronger in what I can handle. It’s an entirely different experience to watch the dead when they are visibly dead. It’s heartbreaking. It’s monstrous. But you CAN’T do a thing about it. It’s a whole other kind of hell to watch happy people crowding around a camera hoping to see what’s going on, hoping to get on film, or completely oblivious of the fact that a camera is recording their every moves knowing that within a number of years that one can count on a single hand most of them would be murdered. How do you reconcile the knowledge of the end with visions of mundane times? And then while indulging in my weekly search for a new book to read through my library, I stumbled on Glenn Kurtz’s ” Three Minutes in Poland,” the book spawn of the film. I will honestly admit that I was crying while still reading the intro. This was some feat as I began reading it while commuting to work on a local train and local train ride is not a place where one wants to admit vulnerability.

The story
So how does a film strip translate into a book? In 2009 Glenn Kurtz stumbles on a film of his grandparents’ long ago European vacation while going through stored items at his parents’ house in Florida. Amongst such popular European tourist “traps” as Paris and Switzerland, for merely a day in 1938 David and Lena (Liza) Kurtz visit a Polish town Nasielsk where David was born in the late 1880s and shoot three short minutes in a life of the largely Jewish shtetl a mere year before the Nazi occupation. Its three minutes of sweeping panoramic views of the town’s pride and joy, the synagogue, three minutes of children jumping into the screen, three minutes of people going about their day oblivious to the camera, never in the know what is just around the corner.  Kurtz, however, is not oblivious to the significance of the film and gets in touch with the Holocaust Museum in DC to get the film restored and documented as part of the Steven Spielberg Video and Film archive. The entirety of the 14 minute film (both in color and black-and-white) including the 3 minutes in Poland are now available for view at the United States Holocaust Museum in Washington DC and can be viewed at this link. The David Kurtz Collection </a

The story could have ended there but in fact it was just the beginning. A granddaughter of a Nasielsk man viewed the video and recognized her grandfather in a thirteen year full faced boy angling for screen time in several separate moments of the film. She got in touch with the Holocaust Museum and eventually Kurtz himself. This discovery took him away from the novel he was trying to write and sent him in a multi-year and multi continent search (even into the bitch of a Polish irrigation ditch) to learn about Nasielsk, to tell as many stories of the Nasielskers still alive and to identify as many people in the film as possible and tell their stories. In the course of the search we meet Morry, Grace, Lesley and others, the few remaining Holocaust survivors of the 80 Jews from the 3,000 strong Jewish community. From some Kurtz learns about Orthodox childhood in a Jewish town. From others he learns gossip from the long ago. From most he learns about their survival in the sea of death. And to all of them Kurtz brings back painful memories while putting them once more face to photo with their neighbors, friends, and parents for the first time since 1939.

Lessons of “Three Minutes”
So. I loved this book. I didn’t want to stop reading it. I cried. I smiled. I cried again. And I was filled with love for my people and their strength. This book was a bright light from the time of shadows. It made me once again consider the miracle of my grandparents’ survival. Like some of the Nasielskers, my maternal grandparents were evacuated from their homes to other lands, in their case, Central Asia where they eventually met each other. And like some others, my paternal grandparents spent the war years in the ghetto but were saved by the miracle of geographic chance. They were lucky and here I am. The times for the Jews are once again trying. Anti-Semitism is not eradicated. There is still plenty of hate and violence. This is why it is important to remember these stories, and to give them life. Kurtz says “It’s going back and saying, Yes, there was a world.” This is the world that we must remember, honor and cherish. This is the world of Nasielsk, of Shargorod, of Warsaw, of Vilna, of Kiev. As a child of survivors and the heir of those that made it and those that did not, it is my responsibility to share their story. And in the trying times of today when a Jewish fraternity in my alma mater, UC Davis, gets defaced by swastikas, when a kosher supermarket in Paris gets attacked and people within are killed because of who they are, I must stand up and say along with Kurtz, “In a place where there is no person to make a difference, strive to be that person.”

In time for the Auschwitz Liberation Day, this is dedicated equally to victims and survivors.

Additional information
For those interested, here are a few more interesting relevant links.
1. A link from a talk Kurtz did for Ted.

2. Glenn Kurtz’s page about the book